Following Spanish Meal Times: Where to Eat 6 Meals a Day in Barcelona 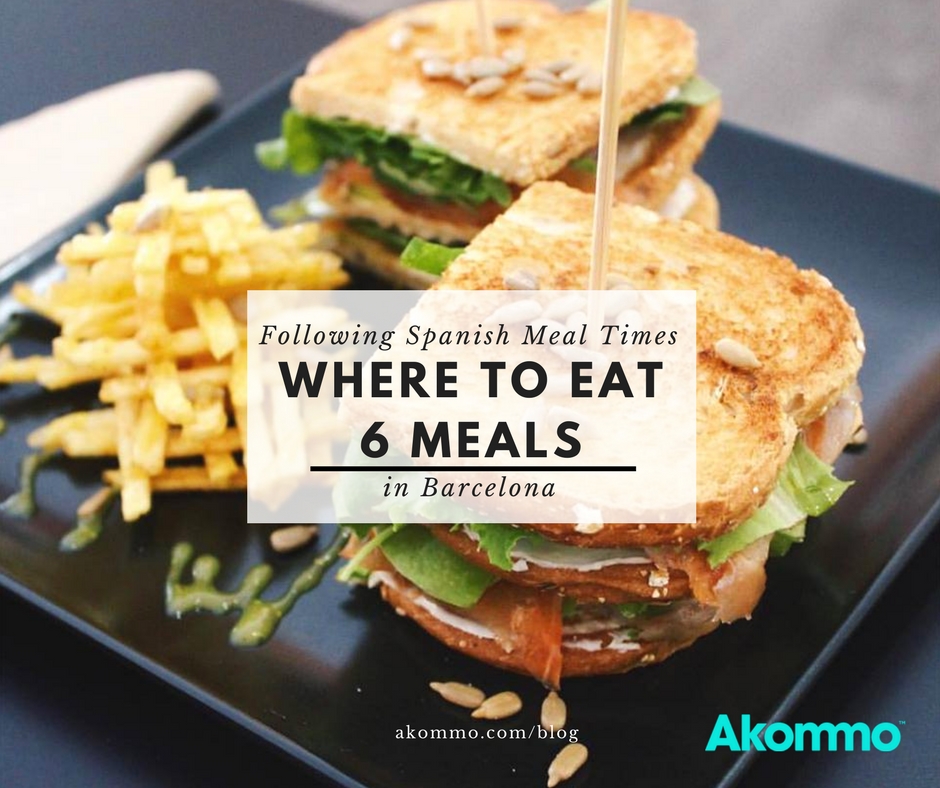 As the upcoming Mobile World Congress is taking place in just under a week, restaurant planning is definitely not what you want to leave to the last minute. If you’re a fellow foodie, chances are you’ve already done a bit of palate-driven research. But are you aware that dinner in Spain doesn’t start until around 9pm or later? Did you also know that most restaurants don’t even open until 1pm (if you’re lucky)? Meal times are a sacred and respected ritual here, so before standing out like a sore-thumb-tourist, check out our local guide to Where to Eat Your Six Meals a Day in Barcelona.

WARNING: this article is going to make you very, very hungry – so read at your own risk! It’s also worth mentioning that the Spanish diet is very carb heavy. Don’t be afraid of bread, people, especially when it tastes this good.

Where to Eat 6 Meals a Day in Barcelona

OK, so Spain isn’t exactly a country that’s well known for its green detox smoothies and 5am yoga early birds; we can probably leave that title to the North Americans. As for the Spanish, they like their carbs, and they like them early. You can grab breakfast in Barcelona from around 7am – 9am. Many cafes in Barcelona don’t open until 9am, but the sweet-smelling bakeries are an “immaculate exception” to the rule. A typical breakfast in Barcelona could consist of the following options:

-Pa amb tomaquet, or bread with olive oil and a tomato sauce spread

-Croissants (ham and cheese, chocolate, butter… are you drooling yet?)

-Cookies or muffins (try the ensaimadas or polvorones if you can find them!)

Shoot back those carbs with a warm cup of espresso with hot milk (café con leche) and get your caffeinated juices flowing! There are some cafés that offer healthy options too – don’t worry. Here are some of the best bakeries to enjoy your first meal of the day in Barcelona:

1- Baluard Bakery – Carrer del Baluard 38 – 8am – 9pm. Everything that these bakers touch turns into gold. This award-winning bakery tends to have a line forming, right around 7:45am. Try the almond croissant!

3- Forn Sant Josep – C/ Roger de Llúria, 98 – 6:30am – 8:30pm. One of the most highly-rated bakeries in Barcelona, and winner of multiple awards in Spain. Try their whole grain Pa de Cavallers! 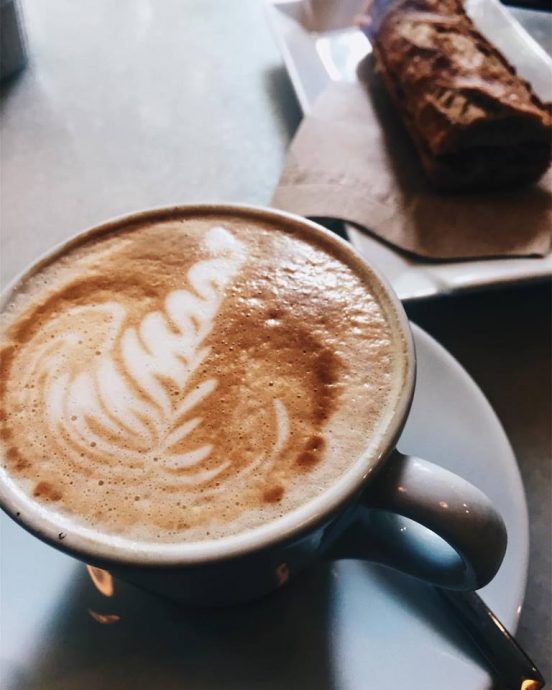 It’s a safe assumption that the aluminum foil business in Barcelona is BOOMING. Right around 10:30am you’ll see little shiny aluminum packages emerging from children’s backpacks and worker’s briefcases alike, ’cause it’s time to snack. Equally as high on the carb and sugar level index, the mid-morning snack is fundamental, especially for school children. For those in the workforce, 10:30am means coffee number two and either a bocadillo (baguette sandwich) or some cigarettes. The bocadillo usually consist of Serrano ham, cheese, or the beloved tortilla – also known as Spanish omelet with potato and onion. Here’s where to get a great bocadillo or second breakfast, an amazing cup of coffee, and cigarettes (just kidding):

In Barcelona, and the majority of Spain, lunch hours are from 1pm – 2pm until around 4pm. Most places offer what’s called the menú del día, which typically includes the following:

… and all of that food for just 10 – 15€ per person. This meal is THE MEAL (literally translated) of the day, and must be treated with reverence and respect. There are usually a handful of options for the first course, like a gazpacho or a salad, followed by fish or meat. A typical dessert in Catalonia is the crema catalana, similar to crème brûlée. Here are some of the recommendations for the best menú del día in Barcelona:

1- Llamber – Carrer de la Fusina, 5 – 9am – 12am. A spectacular menu, with some of the most delicious food in Barcelona. 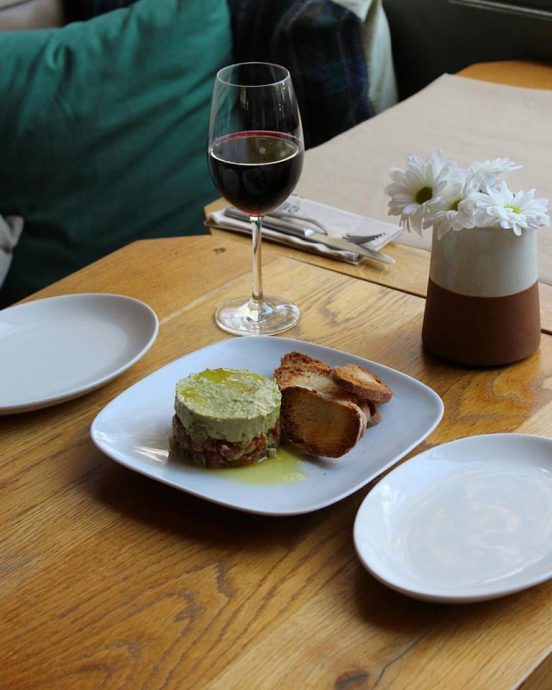 Similar to the almuerzo, the mid-afternoon snack, known as la merienda is another formative part of the Spanish diet (aren’t you loving all of these meal times?!). Around 4:30pm – 5pm is when you will start to see children whip out more shiny tinfoil packages containing sandwiches. Usually, kids eat Nutella sandwiches, or sandwiches with tomato and olive oil, and the beloved Catalan cured meat, fuet. But the merienda isn’t just for kids! This is the moment where the famous Spanish churros steal the spotlight.

If you’re unaware of what churros are, just imagine fried dough covered in sugar, then dipped in a large mug of hot chocolate. I warned you, this country loves its carbs! People also tend to eat pastries or cakes with another espresso or coffee. Here are some famous churrerías (churro cafés) and more pastries! Go butter! Go sugar!

3- Hofmann Pastissería – Carrer dels Flassaders, 44 – 9am – 2pm then 3:30pm – 8pm. DROP EVERYTHING YOU’RE DOING AND GO! Their mango and raspberry filled croissants are just a handful of heaven.

Tapas are recognised worldwide as a traditional Spanish dish, but few know the origin of the word. The tapa was originally used in pubs or taverns as a method of protection against flies. The piece of bread would literally rest on top of their beer or wine glasses so flies wouldn’t fall into their drinks! On top of being traditional, tapas are also highly delicious. Some of the most classic tapas are pimientos del padrón (green salty peppers), patatas bravas (potatoes with a “spicy” salsa), pescaditos fritos (little fried sardines), and pulpo a la gallega (octopus). 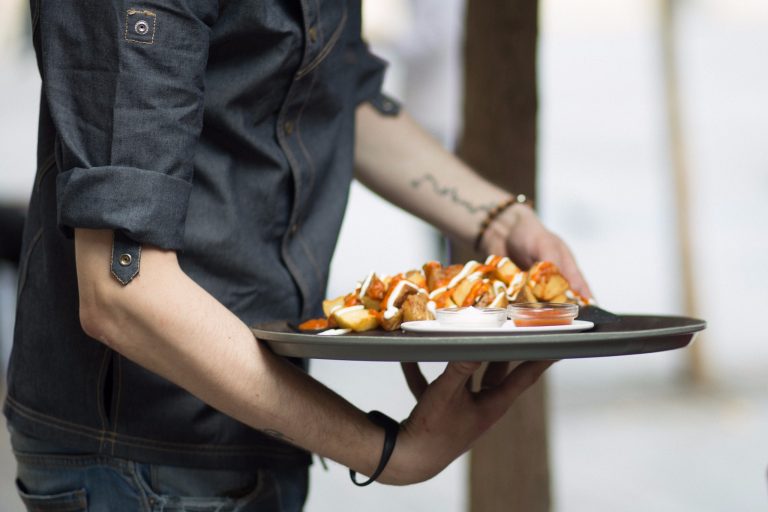 The Last of the 6 Meals a Day in Barcelona – FINALLY dinner time!- La Cena

Spanish people tend to eat much later than most, usually around 9pm and even as late as 11pm!

2- Marea Alta – Avenida de Drassanes, 6 – 12pm – 12am. Some of the most spectacular views in Barcelona. Pricey, but very worth it.

Whether you’re attending a conference here in Barcelona or simply on holiday, these local recommendations won’t fail you. Alternatively, you can call us on 931 78 53 00 – we’d be happy to spend 30 minutes just talking about food! Bon profit!

Interested in hosting your next event in one of Europe's most impressive food capitals? We don't blame you. Fill out your event requirements here and we'll be sure to get back in touch with venue proposals, free of charge.