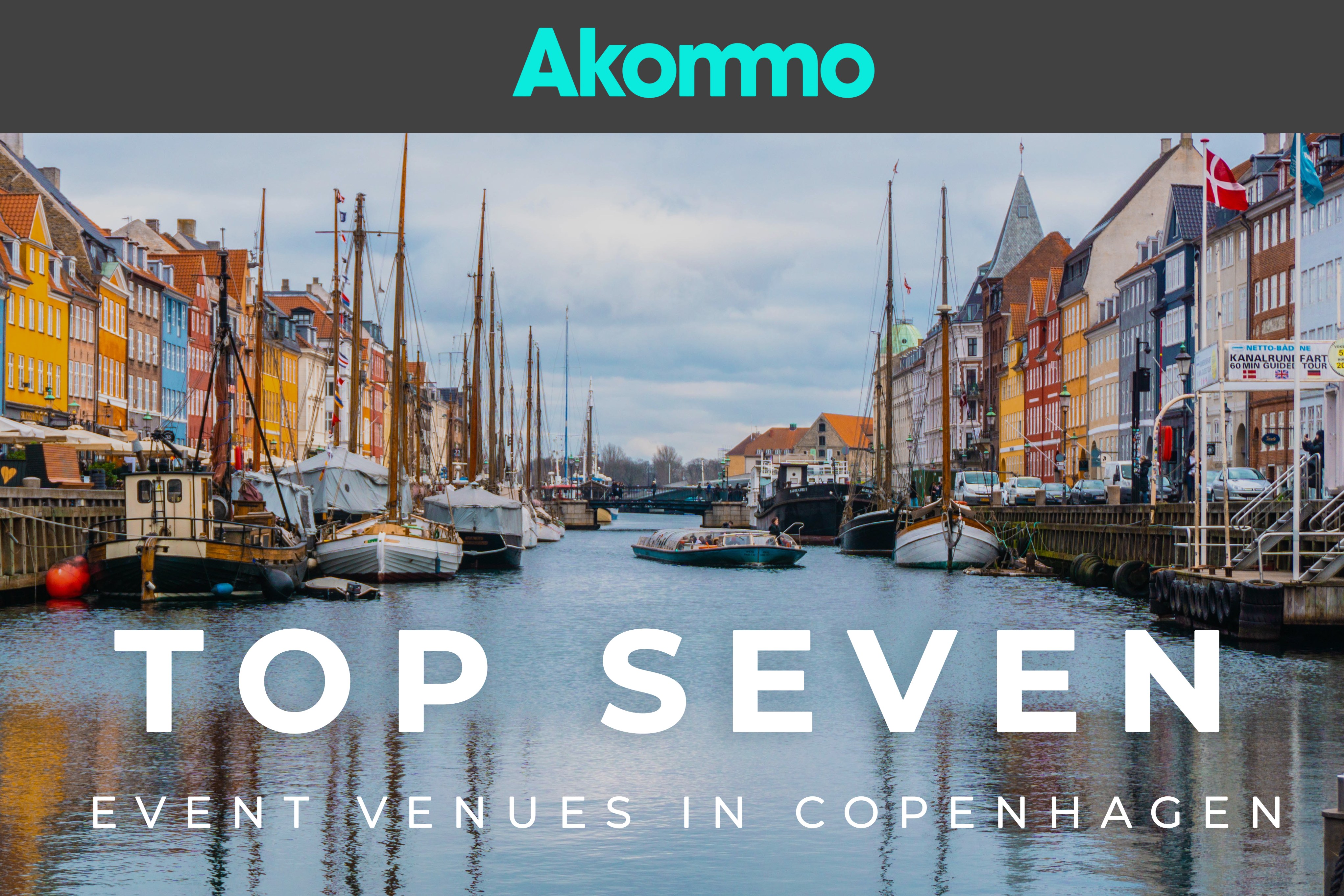 If you are considering hosting a corporate event in 2020, you definitely don’t want to overlook Copenhagen. A city of one million people and the capital of Denmark, Copenhagen sits on the eastern-most edge of the country, connected to Sweden by the Öresund Bridge. Copenhagen is an incredibly picturesque city: a sprawling canal system creates a web of waterways throughout the city. The Nyhavn river makes a passageway for ships, running through the city and emptying out into the sea to the east. Colourful houses, restaurants, and taverns - bright sunshine yellows, deep reds, rosy pinks, sky blues – line the streets and the waterways, creating a charming atmosphere where time seems to standstill.

In addition to being an incredibly stunning city, it is also a successful business centre of Europe; their strong economy is highly dependent on manufacturing and trade (have you ever played with LEGO?). Denmark is also thought to be a leader in innovation and design, and they are actually the most climate-friendly nation in the world. On top of having a high standard of living, Copenhagen is known for being the happiest city in the world. So, why wouldn’t you want to have an event there? 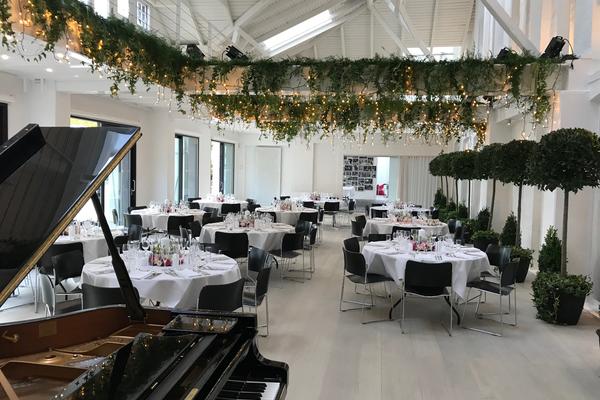 This venue was established in 2005 by a famous Danish conductor, and it was actually the first private concert hall in Denmark. The facilities are beyond impressive, as the rooms are chic and classy with a modern interior that is simple yet elegant. The large windows allow copious amounts of light to reflect off of the mostly-white interior, while the high pointed ceilings create an ampleness to the space.

The building is an architectural fusion of backdoor charm and modern style, with white shuttered doors opening to a cobblestoned courtyard. An excellent space for small to medium-sized events, the atmosphere and ambience is guaranteed to impress anyone who walks through its doors. Because it is actually a concert hall, the acoustics are fabulous, meaning it would make an excellent space for lectures, presentations, and even conferences. Another bonus: there is plenty of parking nearby, so attendees driving in don’t have to stress about parking in the city. 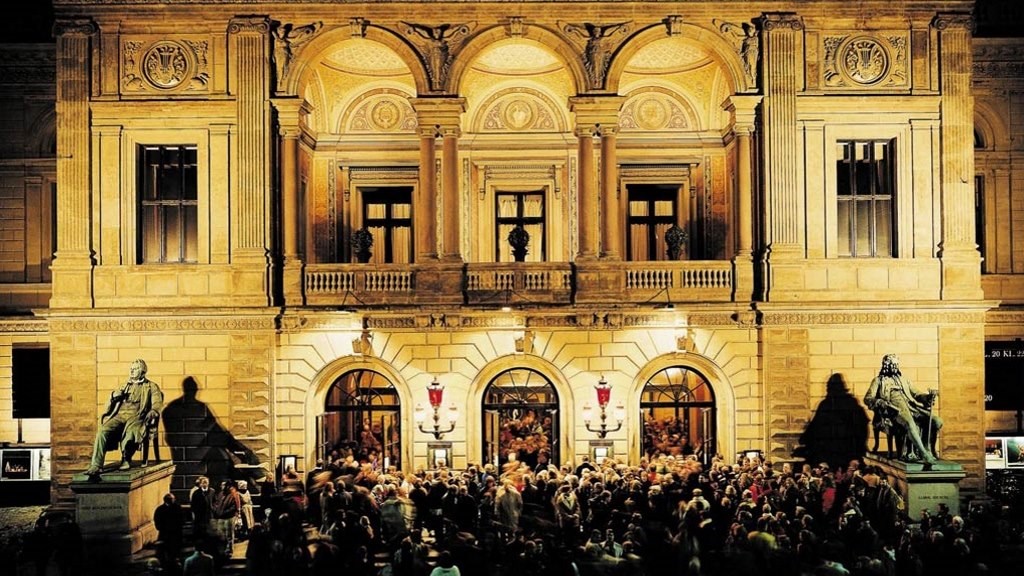 This is one of the most historically beautiful venues in Copenhagen. Originally built in 1874, it was originally a theatre. It has been hosting operas, ballets, orchestras, and concerts for almost one hundred and fifty years! The location is super convenient for any event, as it is quite central. Located in the heart of Copenhagen, it’s right on the Kongens Nytorv square- and it’s also just a few blocks away from the Guinness World Records Museum!

The remarkable building catches the eye of anyone in the vicinity of the square, with its protruding domed roof and iconic first floor terrace with colossal archways. Up close, you can see the brilliant detail of the mosaic ceiling, and this is just the street view! Once inside, the building is no less impressive: wander the endless corridors, examine the stunning ceilings with historic paintings, and scope the amazing view of the square from the breathtaking gallery foyer. It's primarily home to the Royal Danish Ballet (one of the oldest ballet companies in the world), but it also makes an amazing venue for anything from lectures to large conferences. 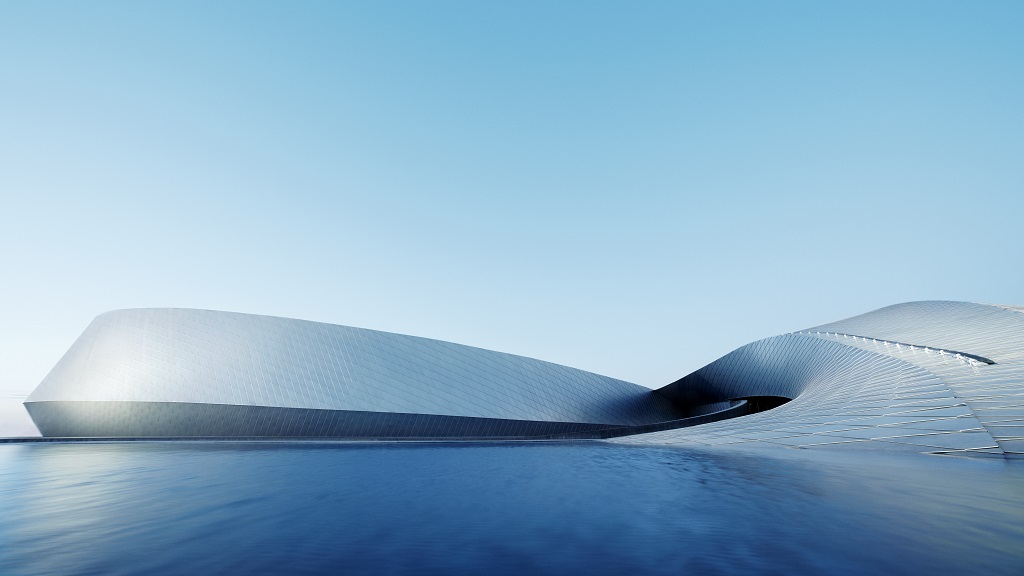 If you are looking for a special place to hold your corporate event, you definitely want to consider this venue. It's arguably one of the most unique event venues in Copenhagen and a super fun place to host meetings, conferences, company outings, and parties. This would be a great space if a lot of attendees are flying in from out of town; the airport is only 1km away, which essentially means that you could walk from the airport to the venue.

The architecture of the aquarium is unparalleled, as it takes the water theme to a whole new level. The whirlpool-inspired building is a sight in itself, with the silver aluminium shingles of the futuristic building reflecting the surrounding sea and sky. The peaceful sound of the Baltic sea serves as a soothing backdrop, and you can even sneak a peek of the massive Öresund Bridge from the outdoor grounds of the facilities. 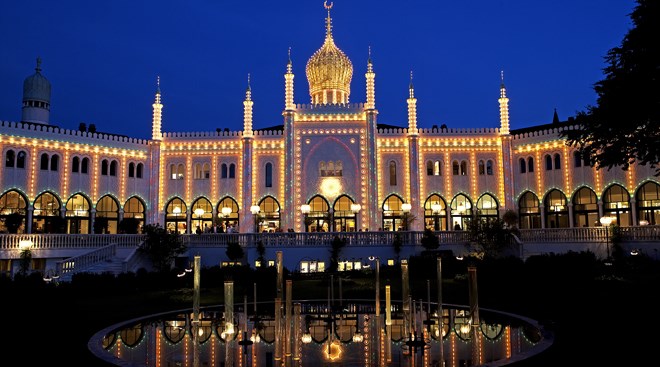 This venue is as classy as they come in Copenhagen. First established in 1909, it's a majestic complex that is considered to be one of the best hotels in the world by Condé Nast Traveller. The architecture is based on Moorish style, with tall unmistakable minarets protruding from the roof of a two-story white-washed building. At night, the twinkle lights reflect on the small fountain pool in the front garden that leads up to the entrance. In the wintertime, that same pond is frozen over, a sure sign of a winter wonderland.

Inside, there is a modern yet authentic design, as antique furniture is found throughout the space. Right in the city centre, it’s hard to find event venues in Copenhagen with a better location. 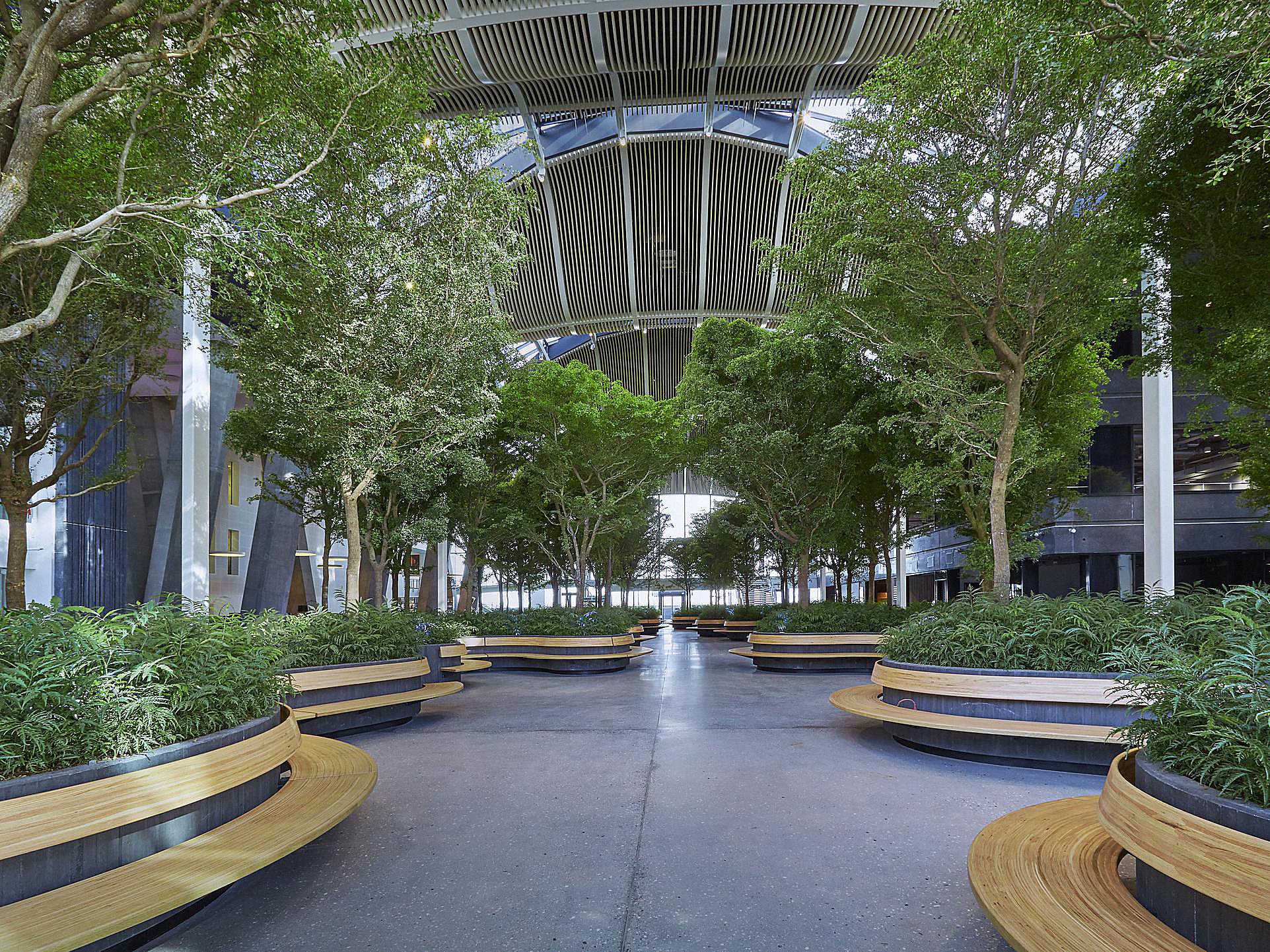 This is one of the greenest event venues in Copenhagen. Actually, they pride themselves on being Denmark’s ‘most sustainable hotel’, as they consume substantially less energy than the rest of the hotels in the country. They follow the IHG Green Engage system, which is one of the leading bodies of energy regulation for hotels. The IHG system essentially provides a very detailed list of steps that hotels need to take in order to meet the changing industry standards.

This streamlined approach has helped to significantly lower their carbon footprint. To date, they have reached a level three out of four (which is quite impressive for such a large hotel chain), which means that in addition to following basic energy-saving practices like using efficient lighting, they are also practising sustainability in purchasing and regular hotel operations. 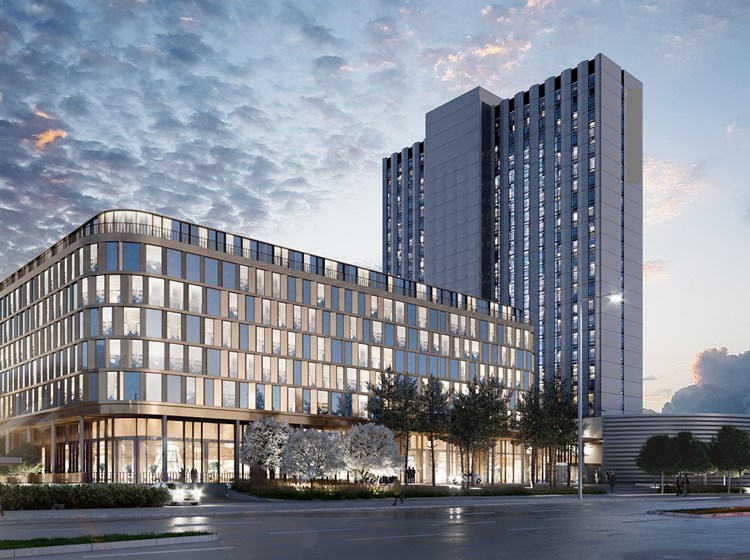 This is an excellent option to host corporate events in Copenhagen. The location is really convenient, as there is easy access from Copenhagen Airport, which is only 6 kilometres away. It’s also walking distance to Tivoli Gardens, which is one of Copenhagen’s historical treasures: the second oldest operational amusement park in the world. It's also easily accessible to the city centre by metro, which is only a few hundred metres from the hotel, and actually, it’s a really pleasant walk to downtown if you have some extra time. Wander down by the Stadsgraven, as the hotel offers excellent views of the canal system.

The facilities can host over two thousand people at a time. The fourteen ballrooms and meeting rooms also have removable walls, so space can be redesigned and adapted to suit your needs. Their facilities are modern and up-to-date, and they even have exceptional audiovisual equipment for your presentation needs. Are you wondering what to do in Copenhagen? No worries- this venue also encompasses Copenhagen’s one and only casino.

Are you new to event planning? Check out our Behind the Scenes Tips on Corporate event planning - the first of a three part series! 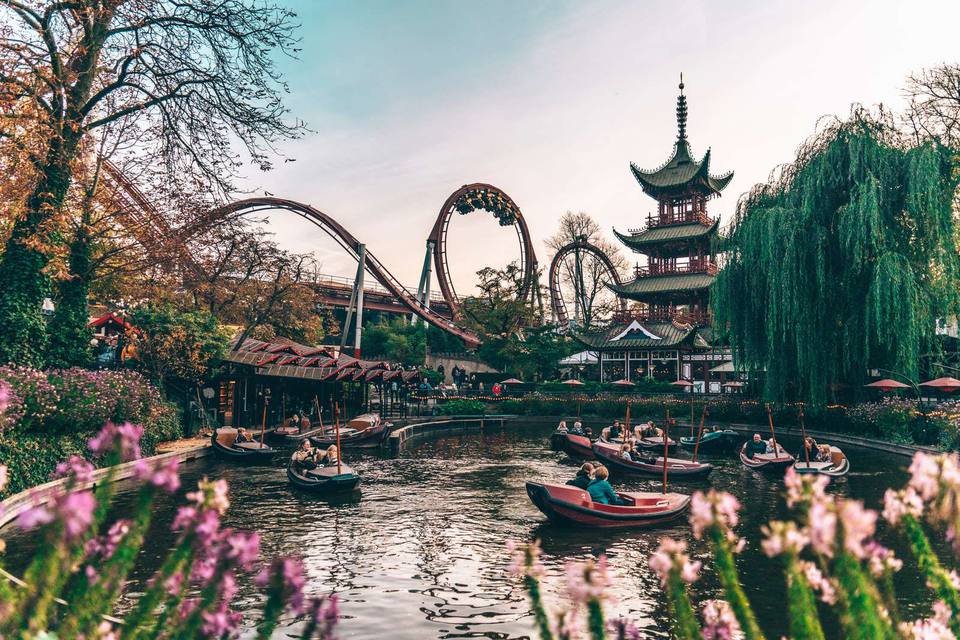 It’s no coincidence that we saved this for the last venue on our list, as it really does have it all. First opened in 1843, this amusement park has everything from rollercoasters to concert halls, and it is probably the most popular spot to host events in Copenhagen. One of the best things about it is that it is right in the middle of the city, so you don’t have to travel for ages on public transport just to get there. It's home to twenty-seven different restaurants and cafes, so your options for worldly cuisines are endless. Their facilities are available throughout the year, so it doesn’t matter which season you need to have your event.

They have numerous options for holding events: theatres, halls, lounges, and open-air spaces, just to name a few. Whether your event is large or small, there is definitely a building that is suited to your needs!

If you are looking to host an event in Copenhagen, or anywhere else in Europe for that matter, let us help! Email us at [email protected] with your event needs, and one of our knowledgeable teamsters will get back to you ASAP!