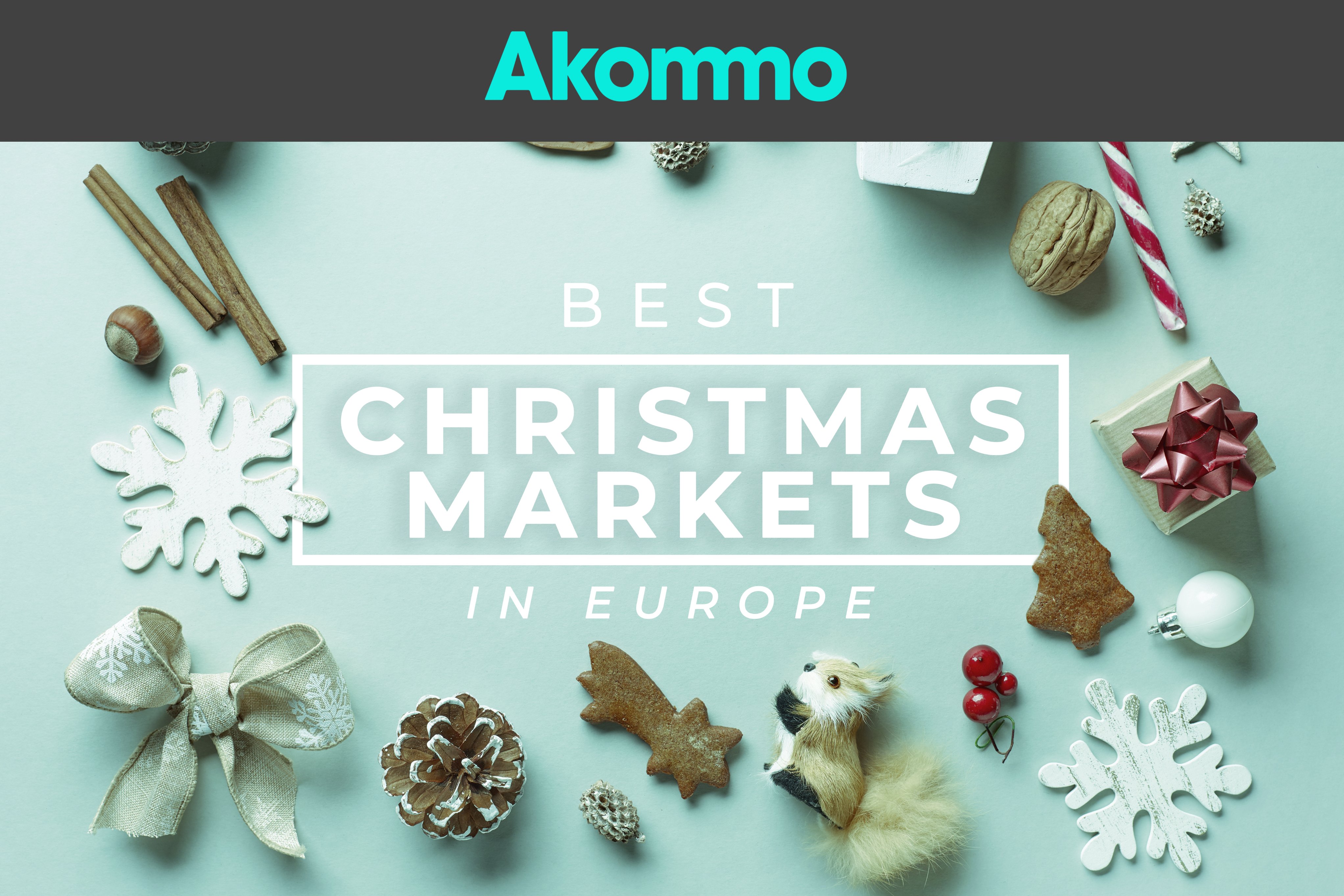 Christmas is truly a festive season all over the world, but it’s no argument that no other continent does the holidays better than Europe. Even though each European country has their own unique Christmas customs and traditions, one thing that makes Christmas time in Europe so special and unique are the Christmas Markets. The origins of Christmas markets in Europe began in Germany during the late middle ages. Fast forward to today, this Christmas tradition has carried on not only through the years, but has spread throughout most of Europe. As we are now well into the holiday season, we have rounded up Europe’s best Christmas markets for you. 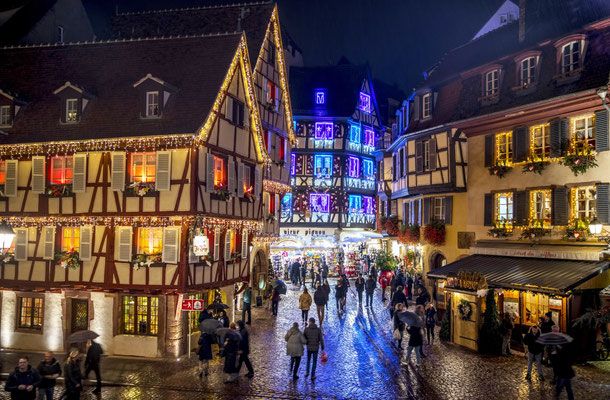 Grand Est, formerly known as Alsace, is an administrative region in Northeastern France that sits near the German border. Strasbourg is its capital city, known to be the formal seat of the European Parliament. Its heritage, culture and architecture are an interesting mix of German and French. Strasbourg is also known as the capital city of Christmas because it was here that Europe’s first known Christmas market took place in 1570.

Now known as the main Christmas market in Strasbourg, Christkindelsmark (meaning: market of the Christ child) is held annually and attracts approximately 2 million visitors each year. This Christmas market displays a huge number of craftwork and Christmas decorations, preserving the heritage and authenticity of the festive season dating from hundreds of years back. If you are visiting Christkindelsmark, this is the perfect venue to try Christmas Alsatian specialities like mulled wine, bredele (Christmas butter cookies), mannele (small, man-shaped brioches), gingerbread, kougelhopf (a circular bundt cake that is yeast-based), and bretzels (pretzels). When you are visiting Strasbourg’s Christkindelsmark, you can't miss its great Christmas tree. Measuring 30 metres, it has long been recognised as the symbol of Strasbourg being the capital of Christmas.

About 68 kilometres southwest of Strasbourg is Colmar, a quaint and historic town just a few kilometres from the foothills of the Vosges Mountains. Because of its historic and old town setting, Christmas in Colmar is known to have a dreamy and fairytale-like atmosphere. What’s great about Christmas markets in Colmar is how they are located very close to each other. There are six markets and all of them are contained within a kilometre. To add more magic to the ambience, the Old Town of Colmar is always illuminated and decorated festively. This year, the Christmas Market in Colmar takes place from the 22nd of November until the 29th of December. 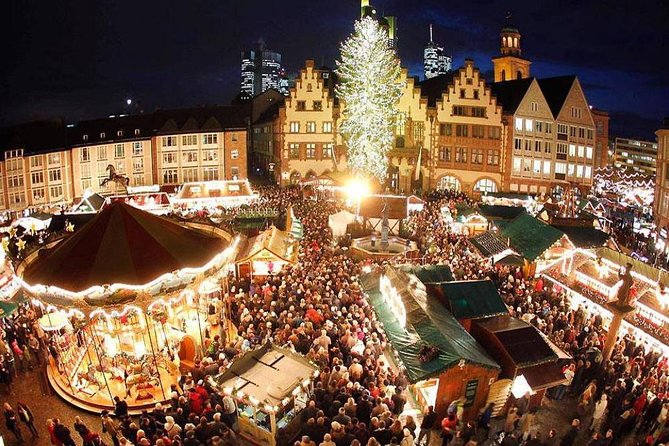 Vienna has plenty of Christmas markets but the biggest and most popular is the one held on Rathausplatz, the square occupying the front of the Town Hall. With over 150 stalls, this is considered to be the largest and busiest Christmas market in Vienna, attracting as many as 3.5 million visitors per year. The nearby park is also filled with other yuletide activities such as a 3,000 square metre ice skating rink and Vienna’s very own “Tree of Hearts”, a tree decorated with small, lit-up hearts in Rathaus park.

Those who prefer a more low-key Christmas market in Vienna can take a 10-minute walk to the Maria Theresien Platz, where there is a Christmas village located between the Kunsthistorisches Museum Vienna (Art History Museum), and the Naturshistorisches Vienna (Natural History Museum). The Christmas village is much smaller than the famous Rahausplatz Christmas market. With just a little over 70 market stalls that sell traditional Viennese and Austrian Christmas handicrafts, this is the perfect place to wind down after scouring through the bigger and much busier Christmas Market in nearby Rathausplatz.

The Christmas market at Rathausplatz this year runs from the 11th of November to the 26th of December 2019, daily from 10:00 to 21:30, Fridays and Saturdays until 22:00 and on Christmas Eve, they are open only until 19:00. The Christmas Village at the Maria Theresien Platz is open from the 20th of November until the 6th of January 2020. 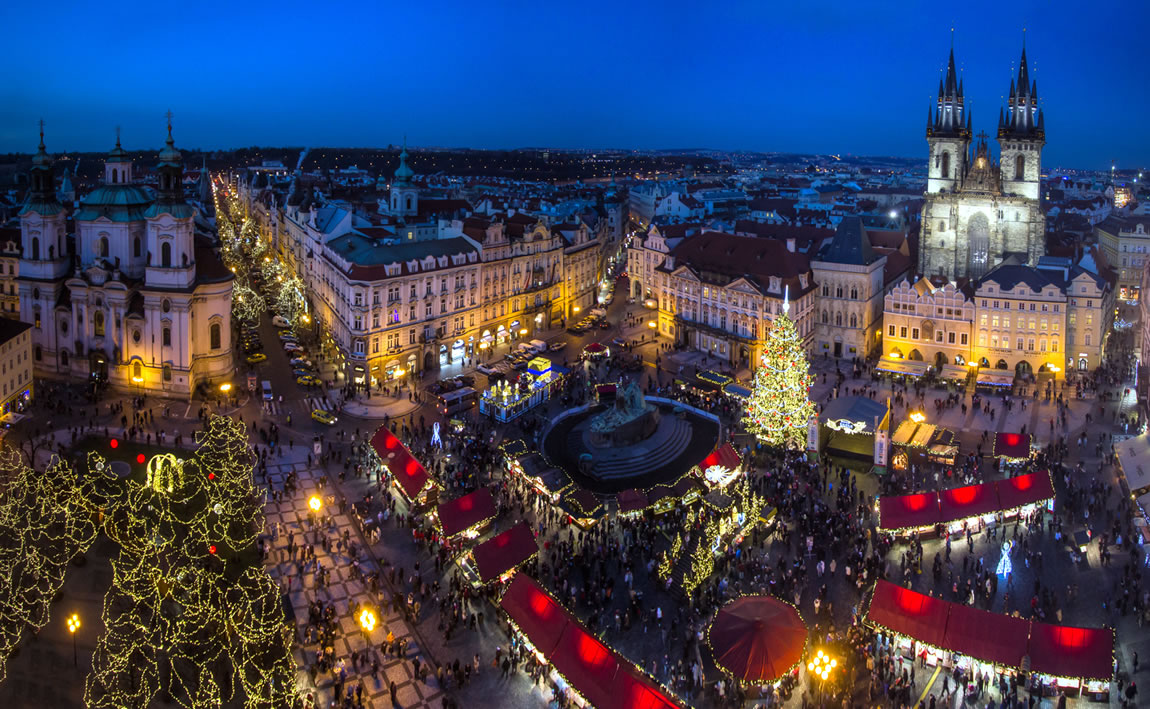 At any given time of the year, Prague exudes an old-world charm that draws in tourists from all over the world. With gothic architecture displayed in its churches and buildings, it’s not hard to see why the Czech capital that is nicknamed 'The City of a Hundred Spires' has attracted a record number of 7.9 million tourists in 2018.

Prague’s Christmas markets run from the 30th of November to the 6th of January. The city has a number of Christmas markets but if you can only visit two, let it be the two most popular, held in Old Town Square and Wenceslas Square, both a mere 5-minute walk from each other. What makes Christmas markets in Prague quite special are the booths that are festively decorated like quaint wooden huts. Visitors of Prague’s Christmas markets will find themselves spoilt with variety and choice of items on offer such as local handicrafts, jewellery, wooden toys, scented candles, Christmas ornaments, and dolls in traditional costume, among many others.

Of course, no one goes to any European Christmas market without trying the food. While in Prague for Christmas, you should try local treats that are unique to the city such as Prazska Sunka (large roasted hams), Langos (flatbread topped usually with garlic and cheese), Sladke Knedilky (sweet dumplings), and Trdelnik (spit cake made from rolled dough).

Since we’re talking about beautiful Prague, we hope that you know that the city is not only lovely! It is also a perfect place to hold events, and here are 5 Reasons to Have Your Corporate Event in Prague. 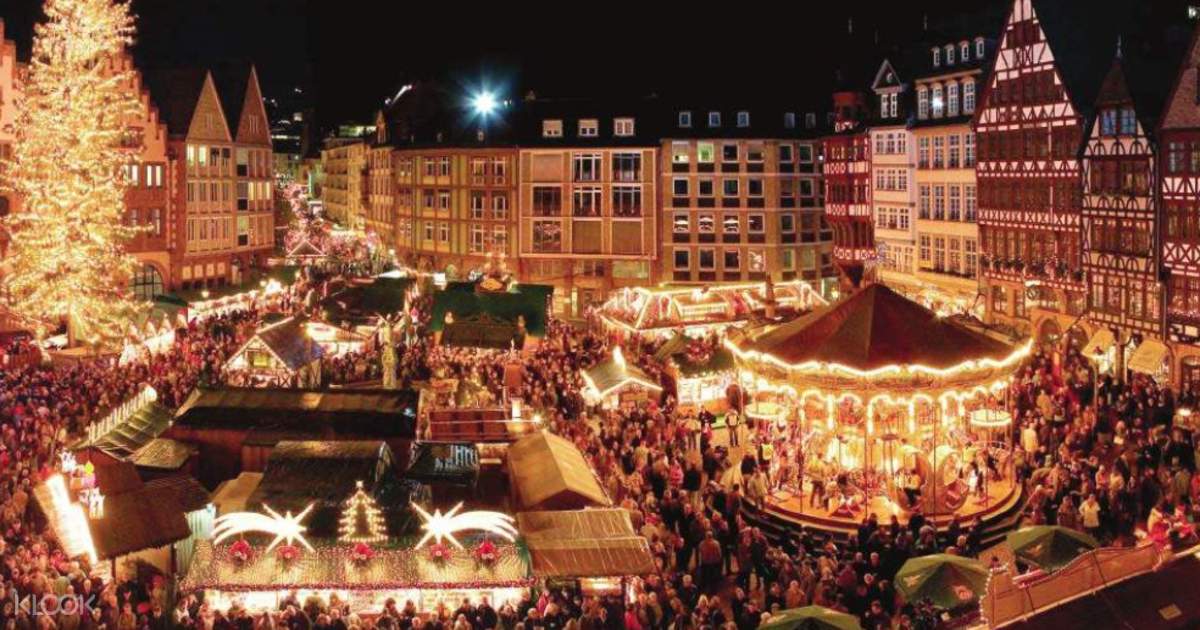 Munich is not just one of Germany’s largest cities, it is also absolutely one of the country’s most beautiful and picturesque. The central square of Munich, Marienplatz, is certainly the place you’d want to be in during Christmas. Munich holds its biggest Christmas market in Marienplatz (St Mary’s Square) from the 27th of November to the 24th of December 2019.

On top of the markets, there is also a 15-metre giant Christmas tree and an ice skating rink at the Marienplatz during this season. The Marienplatz Christmas market operates from the 27th of November to the 24th of December 2019. 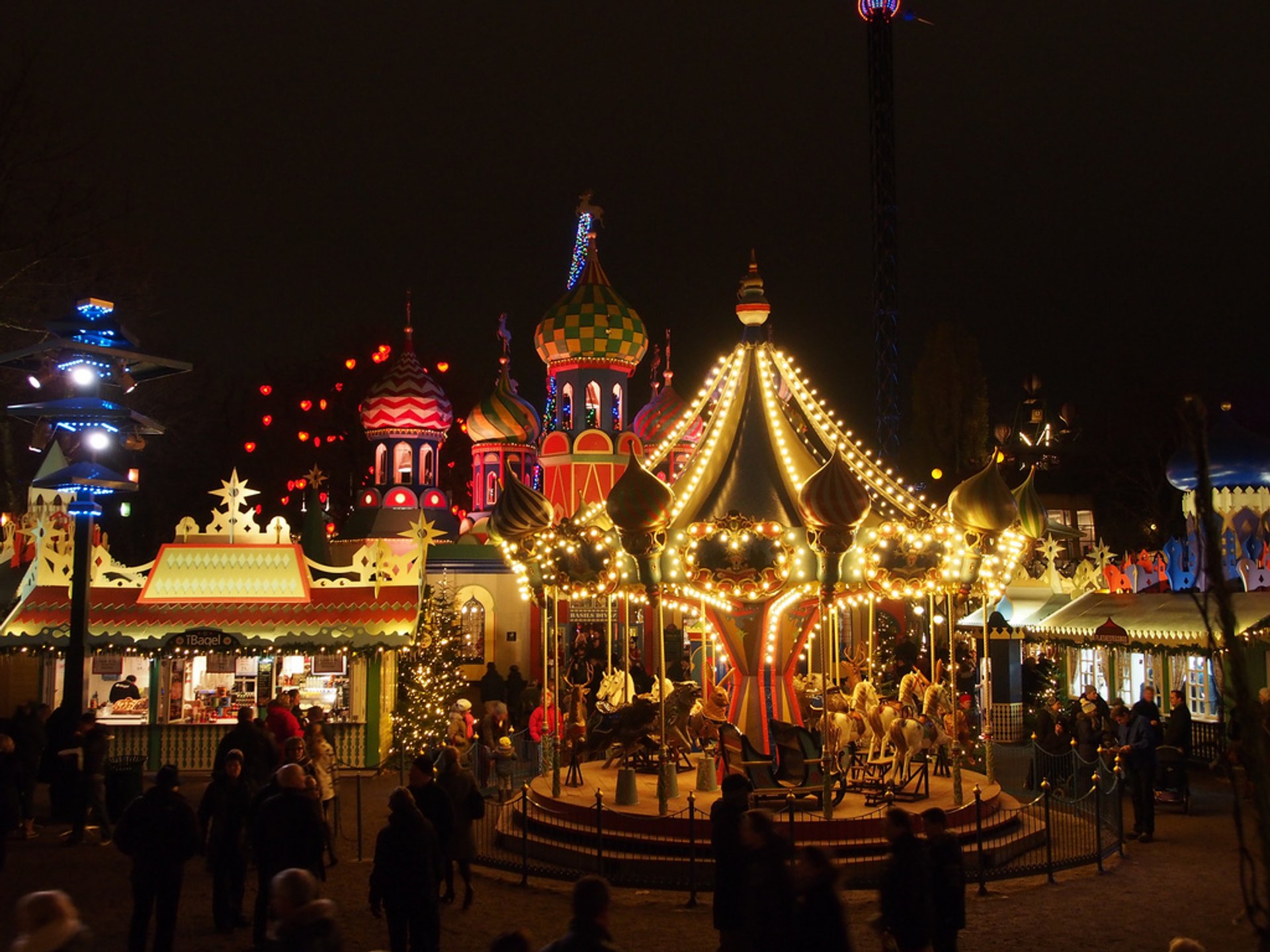 “Hygge” is a Danish (and Norwegian) word that can mean any of the following: a calm, comfortable time with people you love, the complete absence of frustration, or a time enjoyed with people you love often with good food, drinks, warm blankets and candlelight. And apparently, there’s no better time in the year to experience “Hygge” in Copenhagen than the Christmas season.

Even if you don’t indulge in any of the Christmas market offerings in Nyhavn, just walking along the cobblestoned streets of this legendary waterfront is an unforgettable Christmas experience. Opened on the 15th of August 1843, Tivoli Gardens is the world’s second-oldest operating amusement park. Every Christmas market in Europe is unique in their own way, but the one in Tivoli Gardens is quite possibly the most epic and fun. The entire amusement park transforms into an old-world winter wonderland atmosphere as the rides and attractions are running during this time.

At the centre of the park is the Christmas market itself, where visitors can shop for souvenirs, hand-made crafts, various Danish food and drink. Be sure to give ‘glogg’ a try—a popular Danish hot wine that keeps one warm during the winter chill. Note: There is a 110DKK entry price for the Tivoli Christmas market but it is worth every Krone.