Blog > Seville > Why your next event should be in Seville?

Why Should Your Next Event Be in Seville? 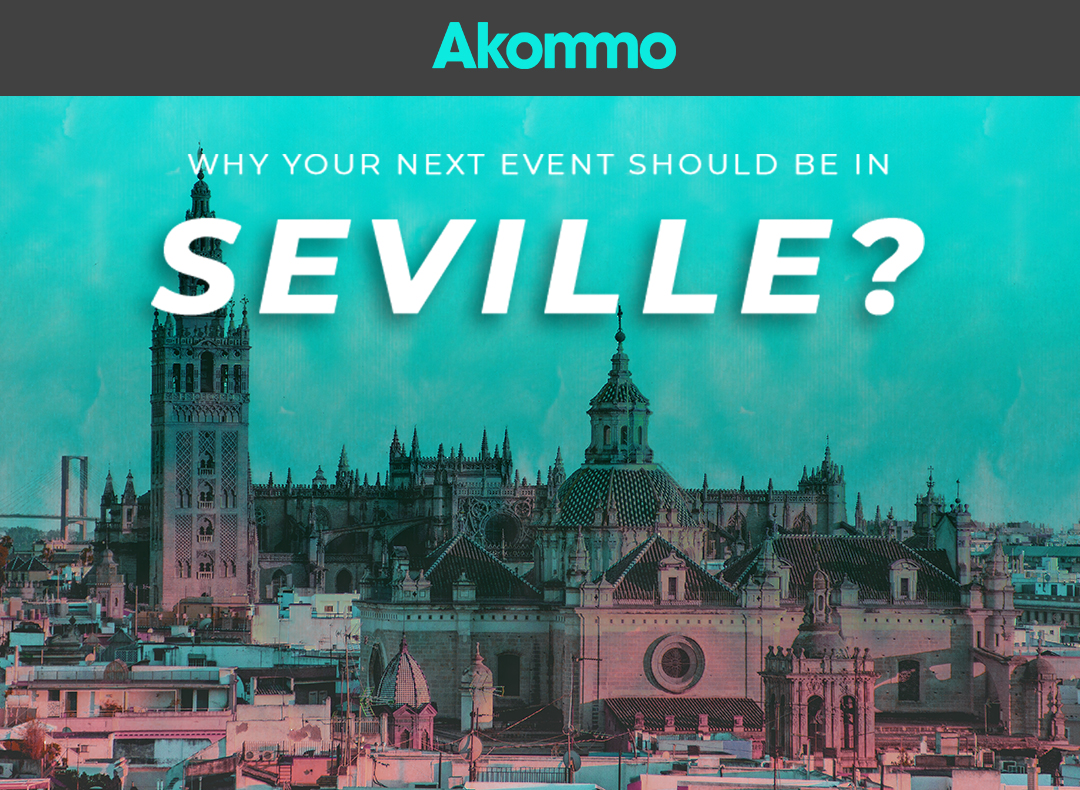 The capital of Spain’s Andalusia region, Seville is famous for its fiestas, Flamenco dancing, rich history and stunning architecture. Because of its popularity as a tourist attraction, many companies are now holding their events in Seville.

Here are reasons why we think it’s a good idea.

Historic buildings, flamenco, and great weather. These are the three main reasons why an average of 2 million visitors go to Seville each year. Seville is Spain’s fourth-largest city and probably has one of the best climates year-round in the country.

If you are planning events in Seville, it is probably helpful to know that spring is the most popular time to visit Seville. Maximum temperatures in Seville range between 25 to 30 degrees Celsius, and walking around Seville is made extra special as the wonderful aromas of the orange blossom (Azahar) that Seville is known for fills the air.

Rainfall is also rare during this season. This, coupled with the pleasant temperatures in the city are factors why Seville is extra popular during spring. This is an important consideration when planning an event as venues and accommodation in Seville can be busier than usual.

The good news is that Fall (Autumn) and winter in Seville are not that cold. Temperatures in winter remain mild in Seville (it almost never gets lower than 10 degrees Celsius), and given that fall and winter are shoulder seasons in Spain, it may be a great time to hold your event in Seville.

Euros go a moderately long way in Seville. Just as an example, a one-way local transport ticket in Seville costs about 1.40€ and taxis on a normal tariff start at 2.00€, with 0.94€ for every succeeding kilometre.

If your company is holding events in Seville, you won’t have a hard time enticing delegates and guests to come. Because Seville enjoys an average of 300 days of sunshine a year, there are plenty of outdoor cafes and restaurants. And with tapas starting at 2.00€ each, a small glass of beer at 1.00€ and a glass of wine for 2.00€, guests and delegates will surely want to stay in Seville long after the event has finished.

If you are in the search for one-of-a-kind corporate venues around Europe, our article about 9 Unique Venues in Berlin and 5 Historical Venues in Paris may give you original ideas.

Spain is considered to be one of the world’s most festive countries and this is particularly showcased in the south of Spain (where Seville is the capital). Spring is normally the time when this region comes to life, but one can visit Seville at any given time of the year and find themselves in the middle of fiestas and festivities.

People from both neighbouring and far-flung places visit Seville to join in the festivities and it’s not hard to see why. Semana Santa (Easter week) is one of Seville’s biggest and most spectacular events. The annual week-long event involves processions with carnival-style floats and masked penitents.

Andalusia, Southern Spain’s autonomous community, of which Seville is the capital, celebrates its largest annual fair in April. Called the Feria de Abril, or Le Feria de Sevilla, it began in 1847 as a cattle trading fair. Over the years, it has become known internationally as a week-long celebration of bullfighting and flamenco.

With plenty more fairs throughout the year, events in Seville are undoubtedly much more fun and interesting than any other destination venue.

If your event is going to be in Seville, rest assured that travel logistics are not going to be a problem. Seville has its own International airport, San Pablo Airport, more commonly known as Seville Airport (IATA Code SQV), and is located 10km northeast of Seville.

Starting its operations in 1929, Seville Airport is the main international airport serving Western Andalusia and its neighbouring provinces. Handling about 6 million passengers a year, it is currently the 6th busiest inland airport in Spain.

If you are targeting or inviting international delegates and guests for your event in Seville, it is useful to know that Seville Airport has flight connections to 42 destinations around Europe and North Africa. It also currently serves as base for Vueling and Ryanair.

If you’re wondering where else you can hold our corporate event in Europe, you should check out our articles about Why You Should Have Your Event in Lisbon, and 5 Reasons to Have Your Corporate Event in Prague.

When you’ve travelled enough, you will know full-well that there are cities so beautiful that they will charm you off your feet. There are also cities with stories and histories that are immensely rich and vast. And then there are cities like Seville that has both stunning beauty and depth.

Throughout its colourful history, Seville has become the capital of Muslim Spain in the 12th century, became one of the richest and most cosmopolitan cities of the world in the 14th century, survived two major plagues (one of which killed half the city and the other claimed 13,000 people). All through the centuries, Seville has proven to be a resilient city where travellers can uncover its story simply by exploring its streets.

The buildings and establishments of Seville are not just jaw-droppingly stunning, they also tell the city’s colourful history through their style and architecture. Having gone through many rulers, religions and wars, the architecture of Seville today is a majestic mix of styles—from Gothic to Baroque, Renaissance and Mudejar.

Through its architecture, Seville is able to tell visitors about its past. Take for instance the Sevilla Cathedral. It was built in the 15th Century on the site of an ancient mosque, where the mosque’s minaret was converted into the Cathedral’s bell tower.

The Sevilla Cathedral, by the way, also contains the tomb of Christopher Colombus and is the world’s largest cathedral. Also found in Seville is the Alcazar Palace, considered to be one of the world’s architectural gem with its intricate and elaborate Mudejar style. The Plaza de Espana, which is possibly one of the world’s most beautiful city squares, perfectly showcases the mix of Mudejar and Renaissance styles. One certainly doesn’t need to be a history of architecture fan to appreciate and be charmed by the beauty of Seville’s architecture.

There are plenty of cities in Europe perfect for corporate events. Check out or 5 Best Event Venues in Budapest and 6 Unique Madrid Event Venues for more ideas.

They say that you have to taste a culture in order to understand it. Fortunately for those visiting Seville, there are plenty of traditional specialities that will surely add flavours to their experience.

One of Seville’s must-try specialities is the Andalusian Gazpacho. It can be enjoyed as a cold soup of drink and features a fusion of 5 different vegetable flavours (red tomatoes, green and red peppers, cucumber, onion and garlic). Another speciality that cannot be missed in Seville is the Rabo de Toro (Bull’s Tail). The tail is slow-cooked for hours in a medley of red wine, vegetables and stock. This makes the meat so extremely tender that it famously falls apart when touched by a fork.

To the less adventurous eaters, Flamenquines (meaty, elongated croquettes) should be on their Seville food list. Slices of ham and goat’s cheese are rolled in pork loin and breadcrumbs and then deep-fried to a golden crisp. What makes food an even more festive affair in Seville is the culture of going out and eating in outdoor restaurants and tapas bars due to the many days of sunshine throughout the year.

We’d love to help you plan your next event! Get in touch with us now at [email protected]