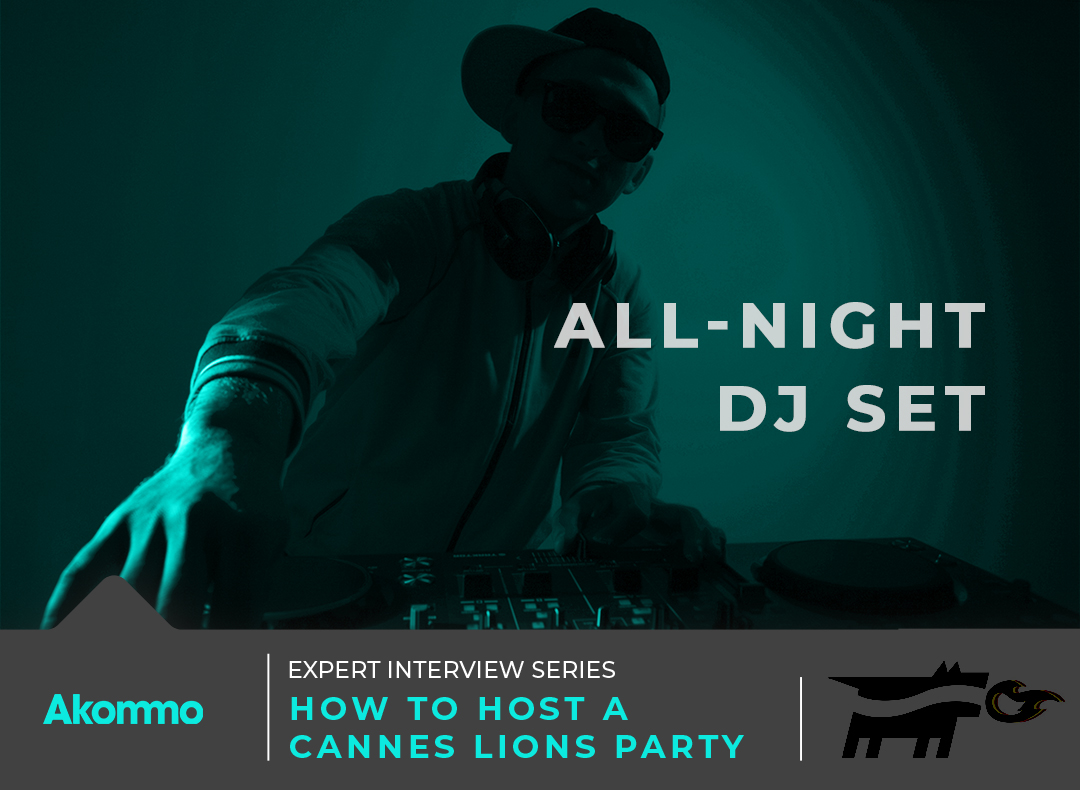 The Cannes Lions International Festival of Creativity is undoubtedly the most highly-anticipated event of the year in the digital, media, ad tech and advertising industries. The biggest players in the industry come to Cannes, receive their well-earned glory and recognition for their incredible work, and inspire the masses. However, Cannes Lions isn't just for the multi-billion dollar companies like Google and Spotify. Cannes Lions is an opportunity for the up-and-coming talent to get a shot at creative glory, thanks to organisations like YoungDogs. This organisation helps to make a name for the "young dogs", or the young talent who haven't quite made a name for themselves yet, to get their footing in the competitive creative industry. Young Dogs is the first global network for young hungry creatives, who just so happen to throw a killer Cannes Lions dance party at Long Beach every year to celebrate their very essence: being young, hungry, and alive. Let's groove into our next edition of the Expert Interview Series and see how YoungDogs host this beachside Cannes Lions dance party every year.

We've had the marvelous pleasure of sitting down with the Anne-Sophie Erbé, Publisher at Vice Netherlands, to chat about the YoungDogs' strategy behind their annual beach banger. Anne-Sophie has been working at Vice for nearly 3 years now and works as a publisher. Major agencies like Virtue, DDB, and Ogilvy collaborate with YoungDogs every year with one collective mission:to create the first global network for the young creative industry. A network that can open every door and give talent the chance it deserves. YoungDogs was founded 25 years ago by 2 Dutch creatives in the Netherlands who wanted to create a stage for young talent who have little to no experience to show their skills and get a foot in the door of an industry that depends so heavily on an extensive portfolio. 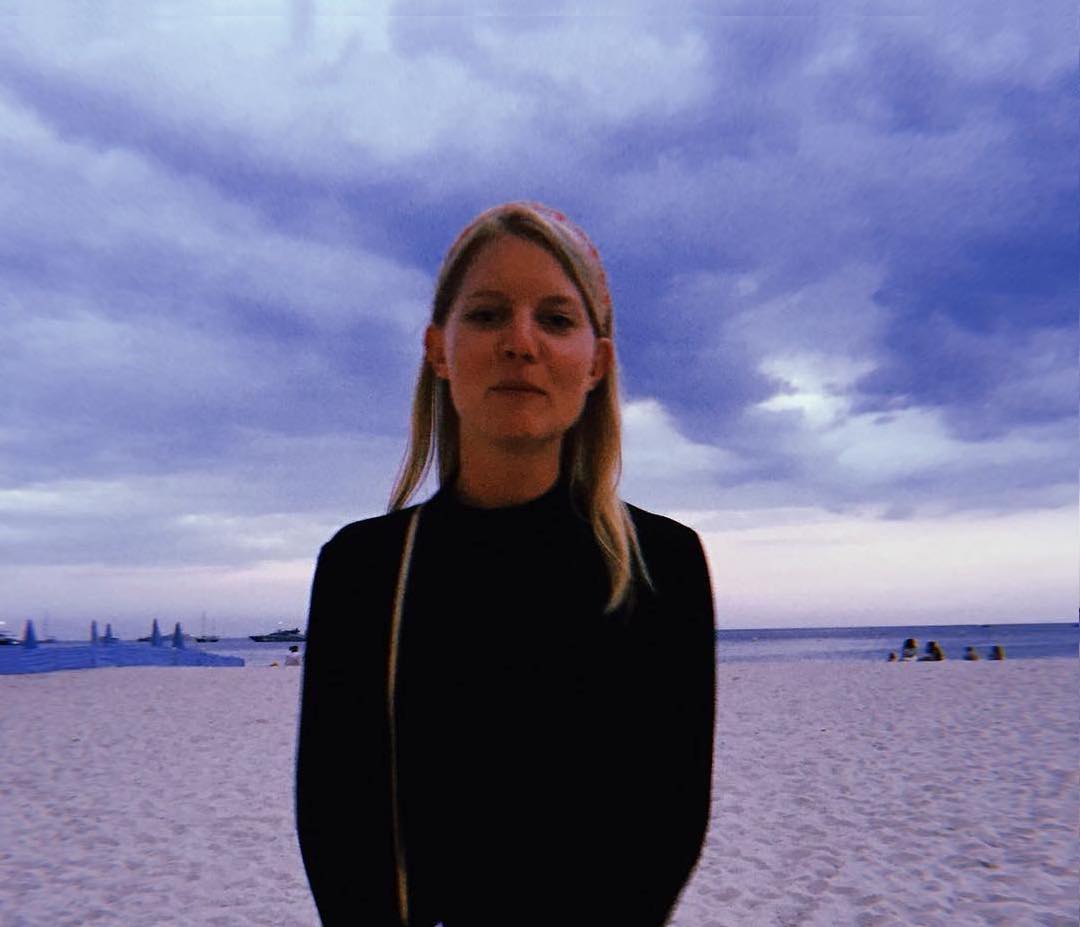 Every year, the YoungDogs committee convene to organise pitches with brands to major and smaller more digitally-driven advertising agencies on behalf of these young creatives who need a chance and a connection. They volunteer countless hours every year to organise pitches with brands that let young creatives try their hand and come up with something unique to show for their work. Anne-Sophie broke it down for us when we asked about how the pitches work:

"Anyone (under 30) can join YoungDogs for free, you just have to sign up. All throughout the year we have briefing nights every time we launch a new pitch to agencies. After the briefing nights, the creatives will have 2 weeks to come up with something unique and then turn in their work. Then, the client and a team of creative directors from the respective agencies begin the reviewing process. After an anonymous judging, the best idea gets their ticket to Cannes."

The YoungDogs board changes every 2-3 years, and new volunteers begin to invest their time and efforts into building up the youth. The board exists of different people who work in the creative industry, such as Vice Media where Anne-Sophie works, as well as mix of creative strategists and account managers who come together "with creatives for creatives." Some of their tasks include making sales to pay fees for pitches and acquiring brands to sponsor and participate, which enables them to take people to Cannes. This sounds like an awful lot of work to as a volunteer, so we asked Anne-Sophie how much time she dedicates to this organisation.

"Every Monday we meet from 6-10 throughout the whole year to attract brands, new agencies, and new creatives. We organise portfolio nights, workshops with agencies, as well as planning for our trip to Cannes Lions, of course." 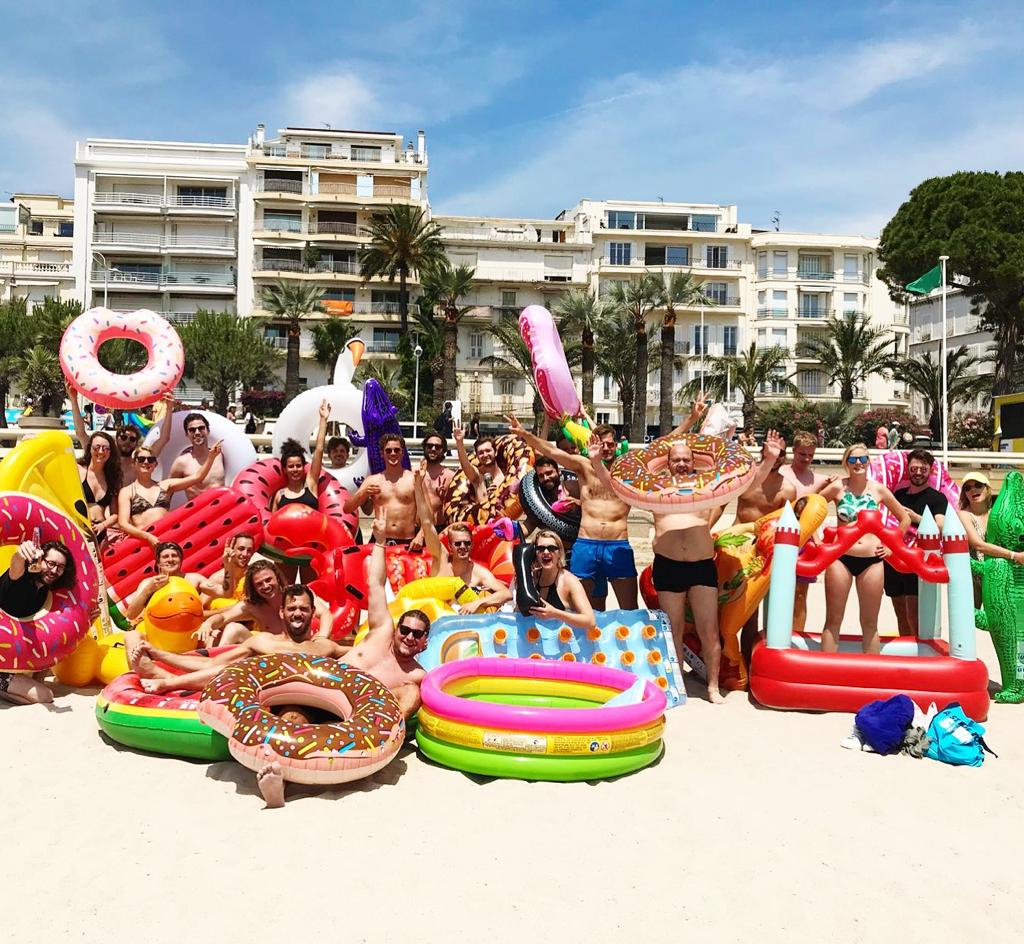 As Anne-Sophie continued to explain the process behind YoungDogs at Cannes Lions, she mentioned that after the jury and decisions have been made, they bring "around 40 young creatives with great potential to Lions every year, and it's definitely the festival you want to go to." 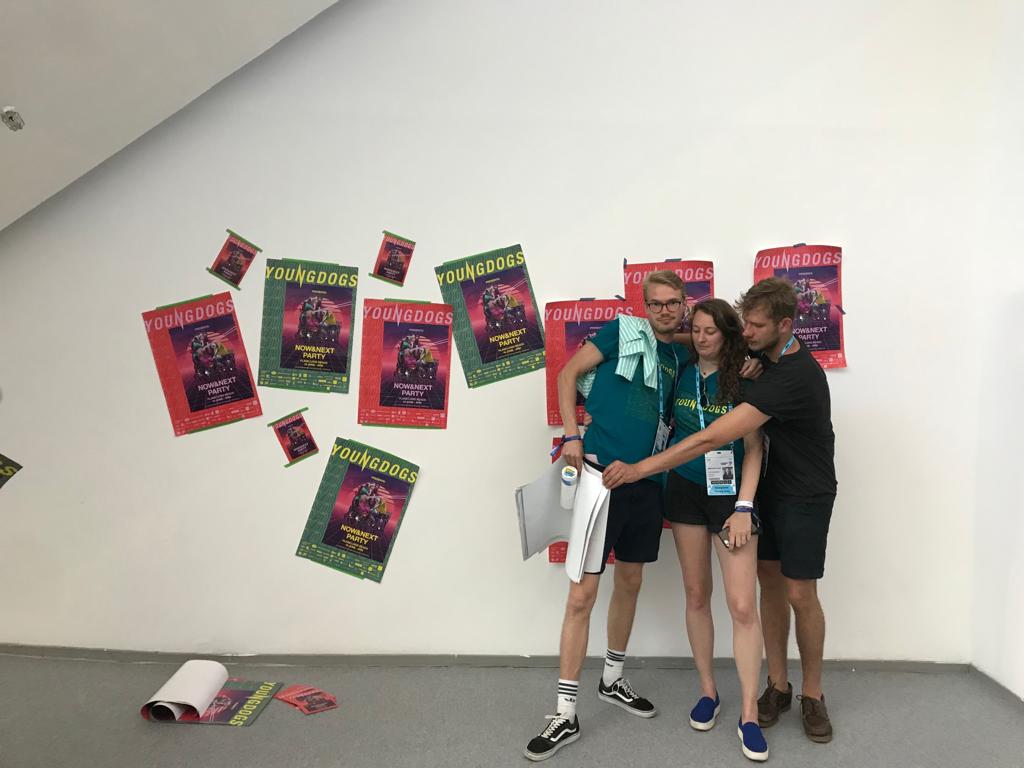 Everyone can relate when it comes to suffering from the ever-increasing prices of the tickets to get into Lions. For a Young Lions pass this year, the prices are 1,845€ per person. Anne-Sophie expressed that this was one of the largest challenges they have to face when it comes to planning for Cannes Lions each year, and that if the prices continue to increase, "we'll have to look for other options for our creatives, unfortunately."

Because YoungDogs is a non-profit organisation, they can't pay anyone for their services and have a very strict and limited budget. Most of their expenses go towards buying passes for the creatives (80k alone), finding accommodation and transportation for them and the YoungDogs team of 8, as well as seeking assistance when it comes to their Cannes Lions party every year. So how does a non-profit on a minimal budget host one of the most famous beach dance parties at Cannes Long Beach every year? 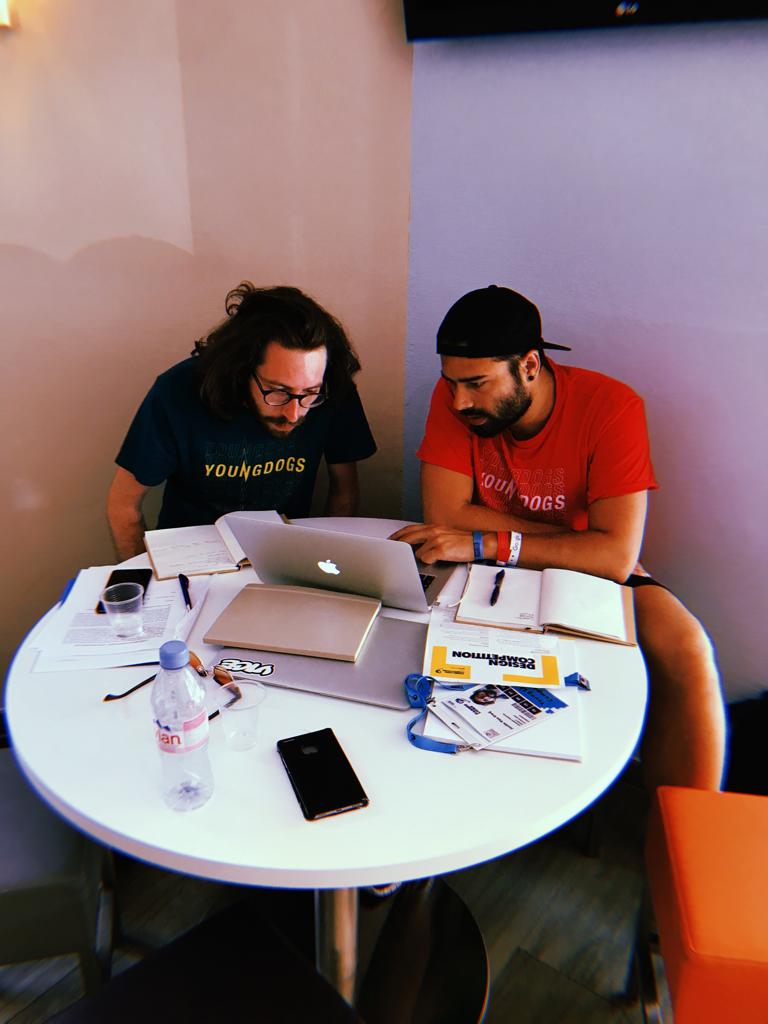 How to host a Cannes Lions Dance Party

With a small budget for their venue, minimal production equipment and team, as well as no means to pay salaries, they depend entirely on their volunteers. They begin planning in April, which, according to Anne-Sophie, "is a bit late but we have a lot going on throughout the rest of the year. Our party in Cannes is the cherry on the cake to all of the hard work and planning throughout the year." 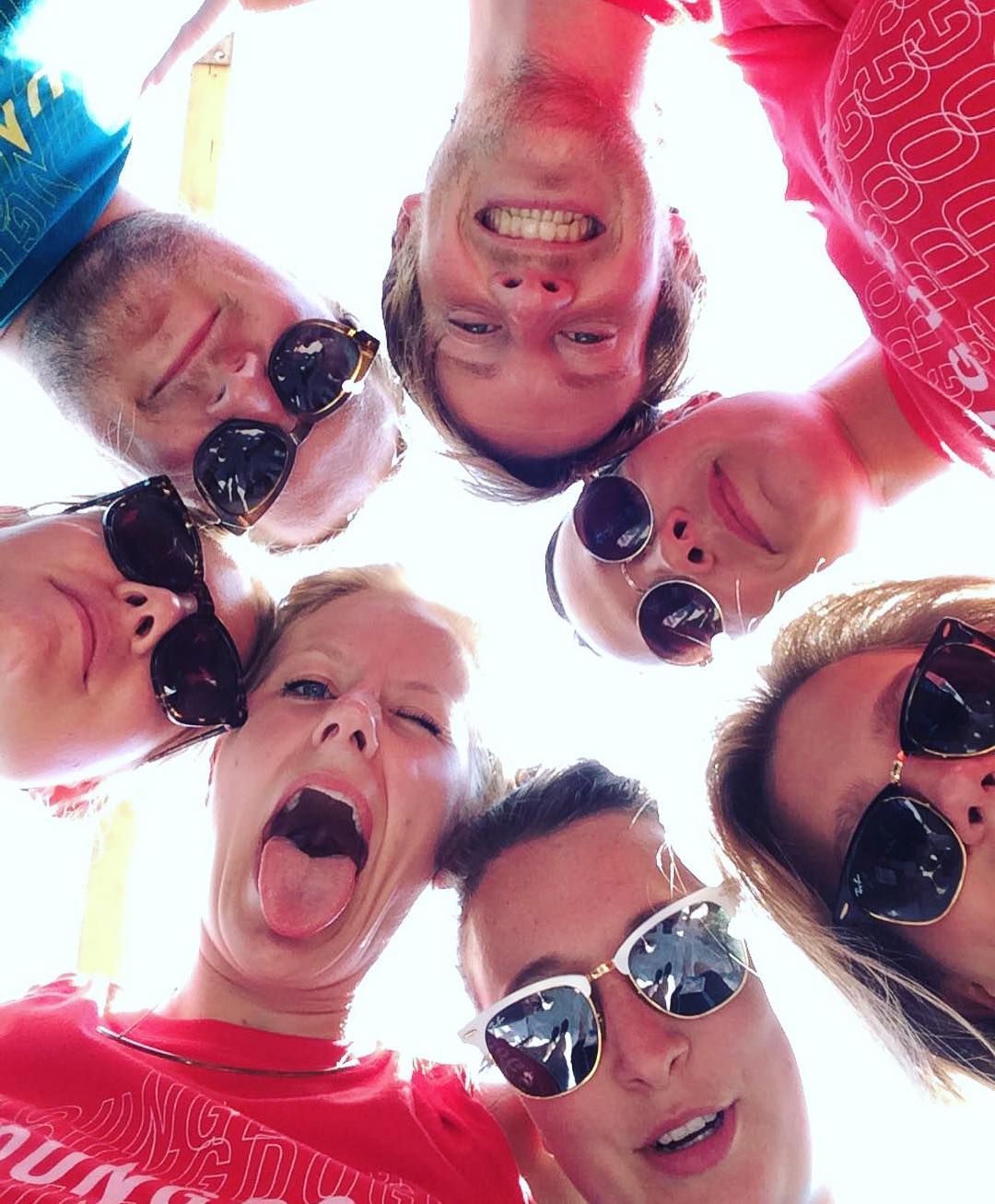 Every Tuesday, the YoungDogs team turns Cannes Long Beach Club into a haven for creatives to have a good time. They want to create a space that's uniquely for younger creatives to enjoy a great party, but they would never close the door on someone who’s 30 or above. We asked Anne-Sophie what an event like Cannes Lions does for the image and brand of YoungDogs, and what kind of benefits this event reaps for them. She kindly corrected our assumption and let us in on what their non-profit is all about:

"Our main goal is to empower young creatives under 30 by trying to give them a stage in the world of advertising, also in Cannes for that fact. We organise pitches with brands, enabling them to work on real briefs and hopefully create the ideas they came up with. And we connect them to creative agencies so we put young and fresh minds in the spotlight when there’s a job available. Our success is measured by how many new creatives we’re able to support." 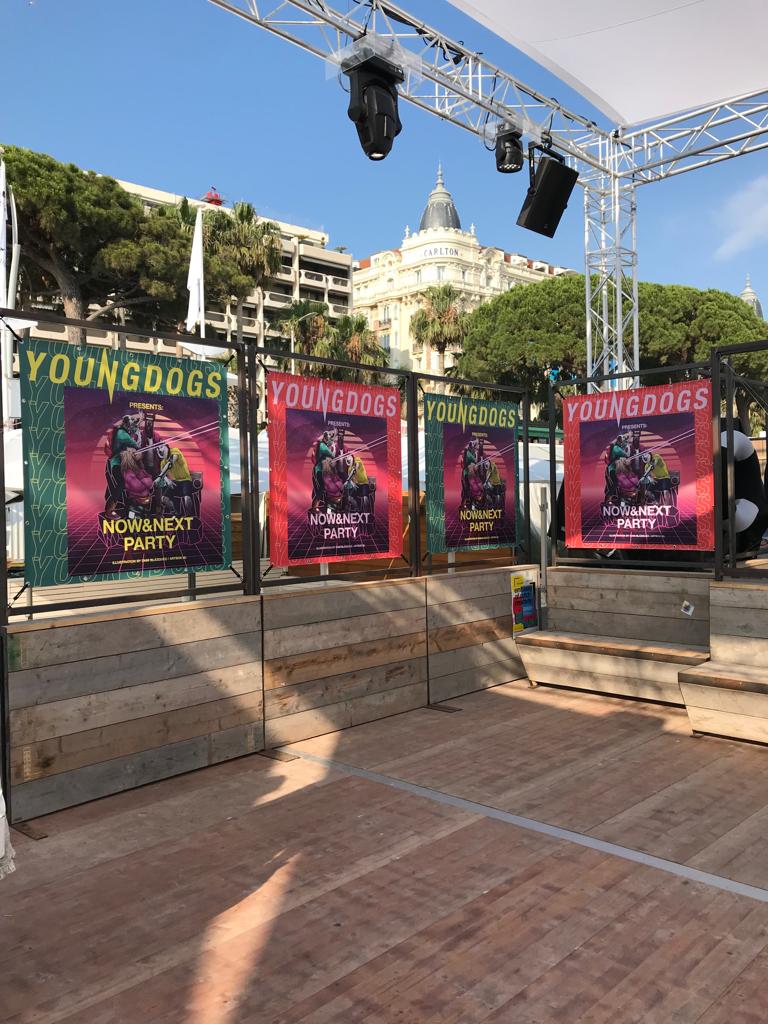 Their DJs are usually local talent in Amsterdam who are down to have an incredible week in Cannes and get their music out there. "We are not able to pay a fee for our djs but they tag along because of the good cause and a fun night of course." They have been able to agree with the Long Beach on an affordable price during Lions due to the fact that it is one of the only open beaches that hasn't been taken over by a multinational conglomerate.

YoungDogs work with their "hustlers" Leo and Bruni, who both own an event production company and have been around for years to organise parties at Cannes Lions, also connected to the Embassy of Dutch Creativity. When it comes to their set up, including the stage, the DJ booth, the dance floor, as well as the lights show, they rely on Leo and Bruni to come through every year.

Anne-Sophie and her team are all about keeping it real and honest, so they always choose to work with real and honest partners. For the past 3 years, they've been working directly with the owners at Long Beach who want to keep Cannes open to the public during Lions.

"The owners of Long Beach are also definitely the reason why we are still able to throw our party there every year as we bring in a big and fun crowd that obviously spends a few on drinks. They are very down to earth and would never give up their beach for a brand the whole week."

Getting into the Cannes Lions YoungDogs Party

When it comes to getting people to come the Cannes Lions YoungDogs party, Anne-Sophie said "It’s not a problem to have enough people come every year. People are still queuing at 2 AM to get into the dance party." Every year, YoungDogs reaches max capacity at the Long Beach club that they turn into an epic dance floor. Over 2,000 young creatives come flooding through to enjoy spectacular themes, artwork and production put on by their very own YoungDogs, right in the heart of Cannes.

"Tickets are free, booze is wildly available, what else do you need?"  You've definitely got a point there, Anne-Sophie.

When it comes to deciding who can be invited, Anne-Sophie mentioned an interesting requirement: "Usually our ideal attendee is a creative who is under 30. That's the majority of our demographic attending the parties." Why should age matter? Well, it does. Imagine signing up to go to a fancy yacht party with no agency to represent, little work experience, but a huge desire to learn and grow. Chances are, these fancier parties are looking for a different type of profile to come to their event to make business.

Speaking of fancy yacht parties, click here to see what it's like to be on the Smart Adserver Yacht Party at Cannes Lions.

Anne-Sophie said that "These young people need a place to call their own, and a place where they feel like they're valued and important as well."  They want to encourage people to follow their own creative paths, not just follow a road that might lead them to corporate success.

"Because we don’t make a profit, we don’t have crazy production budgets, but we're still right there in the middle of it all with the 'big dogs' like Twitter and Facebook. We're really proud of that."

If you've ever been to a YoungDogs party, you'll know that the artwork, DJs, and decorations all flow together. They get support from their friends at Artbox who help them with their visual style, and Unbranded who help every year to create an awesome piece of art for the party. "Last year they created a light box with dogs and laser eyes that moved on the rhythm of the music. It’s these people and their support who help us make this a big success." She mentioned that the majority of their time is spent preparing throughout the year for the party, as well as the week of with set up and take down, but that every year it's a hit and totally worth every minute. 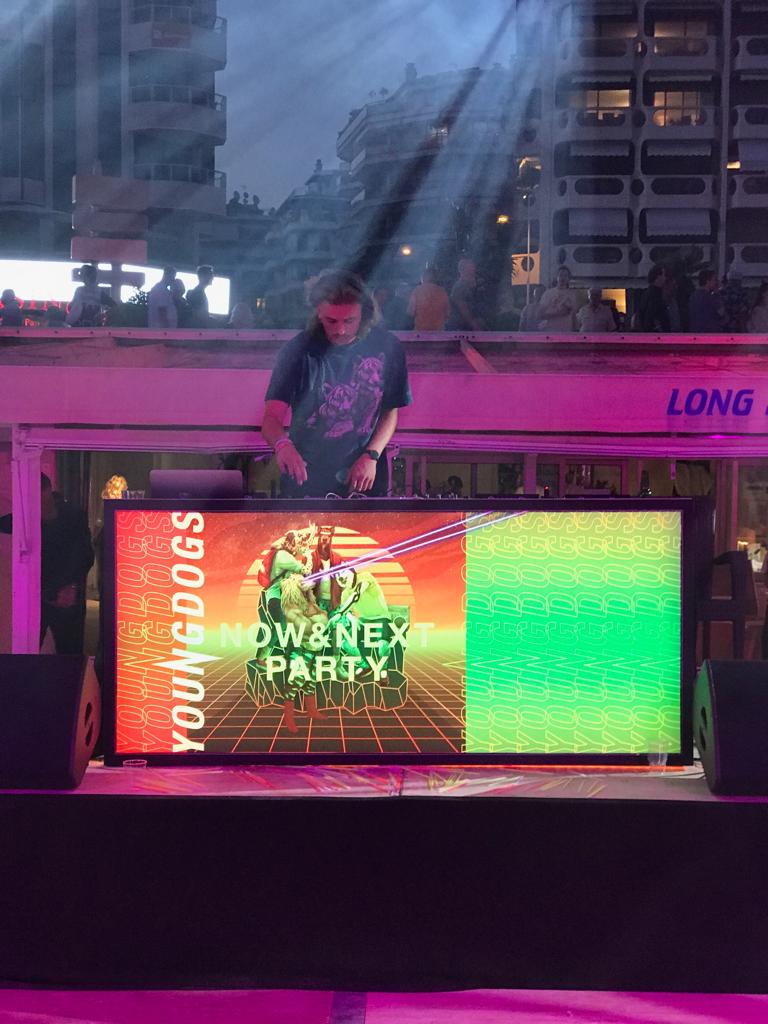 Want to get your hands on Cannes Lions best beach dance party on June 18th, 2019? Subscribe to our blog today to get the first release of the party details as soon as it goes live.

Thank you for keeping it real with us, Anne-Sophie. We can't wait to have a couple of beers with you and the YoungDogs in June at Cannes Lions!